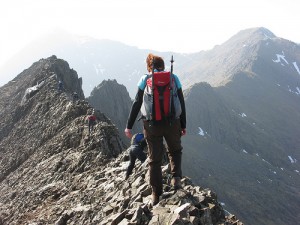 A route for Mountain Bikes?

Google Maps have excelled themselves this time by suggesting a route up Snowdon for mountain bikers which is dangerous enough for walkers!

The Llanberis Mountain Rescue Team were horrified when they found that the knife-edge ridge, Crib Goch, has appeared on the Google mapping tool as a bike route.  In their opinion Crib Goch is dangerous enough without trying to ride a bike along it, and will be contacting Google to get the description corrected.  Crib Goch is not even much of a path as the ridge has exposed areas with precipices below – a slip on the higher part would result in a potential 500 ft fall.  There are also three pinnacles to go round before you reach the Snowdon Summit.   Crib Goch is a known accident hot spot on Mount Snowdon with one or two deaths per year – and experenced mountaineers are included in this number..  The rock is smooth and slippery, the exposed ridge makes walking along it very dangerous in any type of wind.  If you’ve not got a good head for heights this is not a good route to attempt!

The Snowdonia National Park Authority are trying to get Crib Goch reclassified in guide books and on maps as a scramble, rather than a footpath – on parts both hands and feet are needed.  They describe the route as halfway between hill walking and rock climbing – difficult enough for novice walkers, and certainly not suitable for mountain bikes.  The recommendation is for walkers who want to try this route to be equipped with climbing equipment, and have climbing skills.

With regard to the description of this walk as a route suitable for moutain bikes?  Google have stated that people can send feedback via the ‘report a problem’ tool.

4 thoughts on “Mountain Bikers are NOT advised to ride Crib Goch!”