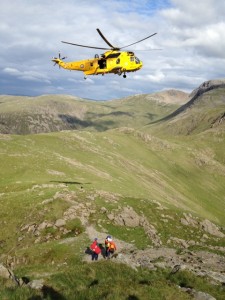 Texas based Bristow Group has today won a 10 year contract to provide helicopter search and rescue services from 2015 ending 70 years of the RAF and Royal Navy providing these services.

The ageing Sea King helicopters will be replaced with Sikorsky S-92s and AgustaWestland 189s.   22 helicopters will operate from 10 locations around the UK.  The helicopters will be located at the existing bases at Stornoway, Sumburgh, Lee-on-the-Solent and Prestwick airport, and at new bases to be set up at Newquay, Caermarfon, Humberside, St Athan, Inverness and Manston.  The new service will be fully rolled out by 2017.

The government stated that the new helicopters will be able to reach a larger area of the UK search and rescue region within one hour of take off than is currently able to be reached.  The estimates are that most incidents should be able to be reached within 19 minutes instead of the current 23 minutes.

Having provided an excellent service over so many years doubts are being expressed about such an important service being privatised in an attempt to save the taxpayer money.  Most search and rescue services in other countries remain under government or military control.  Defence analyst Howard Wheeldon asks whether the private sector operation will take on ‘the same sort of risks that the RAF, the Royal Navy and the Maritime and Coastguard Agency do’, and says that he doubts that they will.   He goes on to question ‘are we doing the right thing in putting this in private hands, where there’s a profit motive as opposed to ‘let’s get on and do the job’’.

The Bristow Group, which has a track record in this area, operating in the Netherlands, Norway, Trinidad and Tobago, Australia, Russia, Brazil and Canada, has welcomed the award of the contract.  A director said:  The award of this contract is a great success for Bristow Helicopters Ltd and a huge endorsement of our reputation for excellence in Search and Rescue.  We are proud to be returning to our British heritage of providing world class SAR services in the UK.

“We will introduce new helicopters to the UK equipped with the latest Search and Rescue technology that will deliver unprecedented levels and quality of SAR coverage across the country.  The existing expertise and local SAR knowledge is immensely valuable and we will ensure that this is not lost.’

Current military staff involved in the current search and rescue duties may have the opportunity of transferring to the private company.

Search and Rescue helicopters play an important role for people walking and climbing Britain’s mountains.  Accidents often occur in otherwise inaccessible areas, and many people owe their lives to the teams who turn out in the worst conditions to pluck people from the mountains.  It is to be hoped that the service will at least continue to be as good as it currently is – improvements are to be welcomed, but profits should not get in the way of saving lives.