Mountain Rescue are called out regularly because people are missing or injured on the mountains of Great Britain.  Different teams operate in different parts of the country and are all completely manned by volunteers, and financed by charitable donations.  The teams can be called out because a walker has been reported as overdue, or because someone has become injured.  People who ring in themselves as they have lost their way can often be talked down by phone as long as they can give a good description of where they are, and if they haven’t got themselves into a difficult position.  But much of the mountain rescue’s time is spent just searching for that lost person – whether someone has reported them as missing, or whether it’s someone who cannot identify exactly where they are.

Each rescue can cost many thousands of £s, particularly when a helicopter is required to help.  It is certainly not unknown for multiple teams from different bases to be deployed, as well as search and rescue dogs and the RAF just to locate one missing person.  And if that person is injured, the time taken to reach them can be a critical factor in whether or not they will make a full recovery. 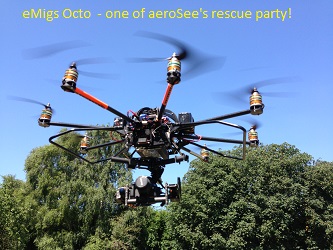 So anything that can help the mountain rescue teams improve their search efficiency is obviously something well worth exploring.  And that’s exactly what the University of Central Lancashire are attempting to do together with the Patterdale Mountain Rescue team which covers the Ullswater area in the English Lake District in the aeroSee Project.  This project involves the used of an unmanned air vehicle, a drone.   Aviation authorities are still developing and refining the regulations for the  use of these unmanned vehicles, and this project is part of the research to try to evaluate what benefits to society there could be.

The drone takes pictures as it flies over the area, and volunteers analyse the data from their own computers in the comfort of their home.  Rather than relying on one pair of eyes, crowd sourced data from a large number of users is analysed using complicated algorithms so that mountain rescue teams can be directed to the most likely sightings.  i.e. a number of people would need to click on the same object in the same photo for it to be assessed as a valid sighting.

Today’s was the first such test of using volunteers, together with this technology, to see if the time taken to locate and rescue a person in difficulty on the mountain can be reduced.  The trial started at 12.30 pm today, and ran until 6pm, and volunteers could log in over this time and view images and tag anything of interest.  Prior to today there had been an opportunity for a practice run.

I took part today, on behalf of MountainWalk, in all viewing 871 images and finding something of note in about 28 in the space of about an hour – the results will be out on Saturday so it’s too soon to say whether I’d make a good Search Agent.  It is all too easy to mistake a rock or shadow for a person!

At least today wasn’t for real, and just a practice run to see if this innovative approach would work.  But if it’s as successful as the university and Patterdale Mountain Rescue think it will be it could be a vital next step in reducing mountain rescue costs and saving lives.  Virtual rescuers could be in any part of the country, or indeed the world, and the crowd sourced help could change the face of mountain rescue.  I certainly wouldn’t mind volunteering for real – just as long as my scores from today don’t mean that I totally missed the casualty!

It’s worth remembering that in order for someone to know they have to come and find you, they have to know you are lost in the first place!  MountainWalk has drafted a Walker’s Form which can be completed with as many details as you want (start point, expected route etc.) and left with someone before you set out – this can be a friend, relative or hotel reception.  If you don’t return on time then an alarm can be raised!  Click here for the Walker’s Details Form